Earlier this month we looked at how to become an apprentice carpenter, but that is not the only trade in the construction industry. As you know, we are big supporters of women in trades, and with that in mind, I have asked our resident electrician Bec Sparky to share her trade story. I’d like to say, before you read Bec’s story, what an amazingly supportive husband she has. What a wonderful world we could live in if we were all prepared to treat women equally like Bec’s husband. 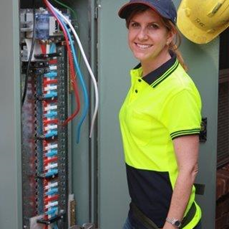 Growing up I always considered myself a tomboy. My favourite thing to do on a weekend was to watch Dad pottering about doing handyman jobs or fixing the car while my sister played inside with her dolls or colouring books.
When it came to the end of high school I assumed I would enter a career that I was meant to as a woman. I started out in Nursing, after a few years I quit. I went to reception and administrative work, and after a few years quit. I finally found what I thought was my dream job, working with children in a pre-school.
During this time I met my awesome husband Wayne who is an electrician. To help him out I would go to work with him on the weekends. I absolutely loved it and I enjoyed the work so much that I suggested to him that I undertake it full time. It took 6 months of insisting that I wanted to do my Electrical apprenticeship and Wayne, seeing how committed I was to the idea, finally relented. He contacted the company he was subcontracting to let them know that his sole trader business would be changing to a partnership and that I would be embarking on my apprenticeship. No sooner had the words left his mouth than the director of this large Electrical Company said “No women on site. I won’t have any women on my sites. It’s too hard. I know what I am saying is illegal but I don’t care, I won’t have any chicks”.
Wayne knowing how committed I was to the career move told them that he would be finishing up the large job he was running and leaving to give me the opportunity that I craved. And so the partnership began. We quickly found work subcontracting to other companies doing shop fit-outs, Defence work at the RAAF Base in Richmond, major construction sites in the city, oval lighting and even some fire detection work.
Meanwhile I was cruising through TAFE thoroughly enjoying myself. I did strike a few issues being a 27 year old Woman in a class full of 18 year old boys. There were nicknames issued “Bookworm” etc and the innuendos flew when I received good grades. But by 3rd year they were all sitting up the front with me getting study tips as I was blitzing the course and they were barely scraping through if not failing. The teasing became respect. I did so well at TAFE that I received several awards including; Presidents Award from Zonta 2003, Rotary Vocational Excellence Award 2004 and Western Sydney Area Apprentice of the Year in 2005. I was also the only student in the class to pass the Capstone exams first go at the end of 4th year. Keeping in mind that I was 8 months pregnant I think that was a reasonable achievement.
The past 10 years have been devoted to balancing home life, 2 amazing children, working as a tradie and promoting the industry via my YouTube channel A Brighter View with Bec Sparky. It has helped enormously having a very supportive and understanding husband he has been unbelievably flexible.
I am passionate about my being an electrician and want to not only encourage more women into electrical but, into other trades and male dominated industries as well. With such a shortage in trades we need to increase the workforce by recruiting more ladies. The main problem is that is not mainstream enough and not in the media spotlight. The more we show women, who have chosen these careers, the more it will become “normal”. Age and size is not a barrier. If a 27 year old 5’2” blonde can change vocation and become a tradie, anyone can. The amount of satisfaction you get out of a hard day’s work can’t be beat.

That’s an amazing story Bec, what strength and determination you have shown. It makes me sad to hear of the discrimination you faced early in your apprenticeship, but gives me hope that there are good people out there like your husband who understand the need for equality. I’m no tradie, but I’m not shy of a big days work with The Builder, and I agree, there is no satisfaction quite like a hard day’s work.

I urge you to take some time to check Bec out on her website, Facebook and of course her You Tube.