You’re going to love this week’s share on My Trade Story from Janine aka ‘J’.  If you’ve ever thought that it’s too late for a career change, or that you don’t have what it takes, then this story is for you!  Enjoy.

My Trade Story with Janine aka ‘J’

Could You Introduce Yourself and Let Us Know What You Do.

I am Janine aka ‘J’, I grew up north of Sydney, in North Curl Curl when the roads were dirt and Australia’s population was only 10 million.

I now live on the Central Coast of NSW.

My hobbies are camping, snowboarding, surfing and travelling.

I am a qualified licenced carpenter and qualified builder. I started as a labourer with my carpenter husband in 2008 when I was 46, prior to that I was at home looking after children, a dental nurse and swimming instructor.

I had no intention of becoming a carpenter. At the age of 16 in year 10 I wanted to leave school and become a motor mechanic. I was to start an apprenticeship with my Uncle in Dee Why. Without my knowledge my mother had other ideas and tricked me into staying at school. I finished year 12 and started working as a dental nurse.

I saved as much money as I could and travelled overseas for three years spending most of my time in Aspen, a Colorado ski resort. 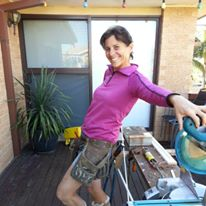 Please Share A Little Of What Lead You To Your Chosen Career?

After having children I had trouble getting back into the workforce as a dental assistant. My husband asked me to help him lay a floating floor and put a steel beam in a clients house. I didn’t want to help but thought it might be more bearable if I got paid.

I got a white card, insurance and was on my way to earning $15 an hour. I was so excited.

One of the first jobs we did was to to open up a living / dining area by removing a structural wall and replacing it with a 6 metre steel beam. We used a chain block and two ladders, this was my introduction to the world of building! 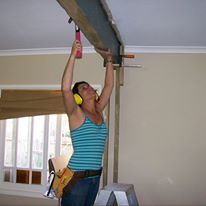 I was in awe at what a carpenter was capable of doing. I couldn’t believe how resourceful they were, and thought there was no way I could succeed in this career. It was a man’s world which required a lot of physical strength, and I was scared!

After the job opening up the kitchen / dining area I worked for a lady laying a floating floor, she had created a Tafe outreach course called Women in Carpentry which had already started at Tafe. I phoned Ourimbah Tafe asking them if I could take part in the course, they informed me the class was full. I begged the head teacher at the time, Gary, and convinced him he should let me participate in the course and reluctantly he did. From what I can gather it was a course for women on benefits that did not want to work and were only there because they were told to go, not because they wanted to go. I think Gary was stunned someone actually wanted to do the course. 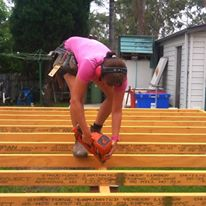 While doing the course, which by the way was free, the teachers suggested I do certificate III in carpentry, not because I was good, because I was working as a labourer and they suggested I go through the right avenues and finish an apprenticeship. I thought, OK, I’ll apply and if I don’t get into Carpentry I’ll go and do nursing. I got into carpentry.

Life as a carpenter happened quite fast. I started as a labourer, and completed Certificate III in Carpentry at Ourimbah Tafe.

On completing certificate III, I then completed Certificate IV in Building, and now I am a student Building Designer.

My experience in the first years was overwhelming. I started tafe as a 46 year old in a class full of 16 – 20 year olds. It was an eye opener to say the least. Not only did I learn about carpentry but also about the very important life topics like sex, drugs and alcohol. It was very entertaining, to say the least.

Most of the guys, I was the only female, were great and I got on with a few of them really well. Sometimes it was tough being in the class, I felt awkward and that I should not be there because I was so old. There were only a couple of guys that didn’t like me being there, maybe it was my age, which I lied about saying I was 10 years younger than I was. I still do not think it had anything to do with being female. I tried to mind my own business, keep quiet and keep out of their way so I didn’t ‘cramp their style’, I hope I was successful. 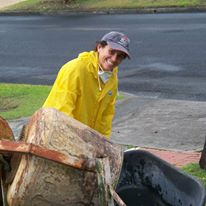 According to some of the teachers the class I was in was the most well behaved. Apparently it was because I was in the class. The first thing a new teacher would say was ‘Oh, there is a female in here, no swearing you blokes’. That used to annoy me because I was suddenly ‘different’ and I was trying not to be by staying low key.

During the apprenticeship my husband and I worked for a builder in Newcastle for a year and a half. I was a bad carpenter, I was impatient and frustrated that I couldn’t do everything straight away!

As an apprentice I felt that others I worked with were thinking, ‘What right does a dental nurse/mum, and an old one at that, have being on a construction site?’ I was so concerned about being a failure and a hinderance that it stopped me from concentrating on the job and becoming a good carpenter.

What type of work do you do?

I get asked a lot to give houses ‘kerb appeal’ which is fun and something I love to do.

I also have a picture hanging business.

Occasionally I work for a Sydney Decorating company when they get too busy for the three full-time builders they already have working there. I build custom exhibition stands for trade shows. That is great fun. Long hours and lots of interstate travel.

I love being a carpenter, there are so many ‘Ahhh’, moments, like when I put my first window in. I was so excited to see that window securely fixed into that frame plumb and level. It sounds rediculous but when I stood there and looked out that glass and saw it open and shut, I was proud of myself, and to this day I love putting windows in.

I still get nervous when I get a phone call from a client asking me to do a job. For years I turned work down fearing I would never be good enough and doubting my capabilities as a carpenter. I have been taught by a shipwright/carpenter and his standards are very high. Sometimes I know I worry too much about the work I do and apparently I ‘think too much’ according to people I work have worked with. I put that down to being a woman…. 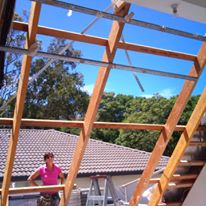 A major issue I have that drives me mad is, if I am on a job site with other tradies and someone new walks on site they usually all have the same standard response to the guys I work with, ‘Oh… got yourself a labourer have you?’ I end up taking an instant dislike to these people and ignore them all day. 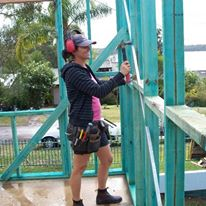 Once a handyman walked onto the jobsite and started to give me a lecture on how to hold a hammer!
Don’t get me started with how patronising the staff at the ‘Big Green Shed’ are towards me, they are not at all use to the idea women can be builders. Sometimes I get a kick out of letting them treat me like an idiot and don’t tell them I am a builder, they are embarrassing themselves not me.

I have been told by the people I work with that ‘site newbies’ as I call them, watch me all day out of the corner of their eye to see if I can use tools properly. I know that is because I am female.

When I phone institutes enquiring about building courses etc they always ask if I am calling on behalf of my son or husband.

Apart from putting windows in my other favourite part of a house is the roof. I am fascinated by the old hardwood roofs that my Uncle and Ancestors used to build. When I was part of the government incentive insulation program I went in a lot of roofs it used to fascinate me. I imagine them cutting the timber without modern tools, carrying and placing them without cranes. 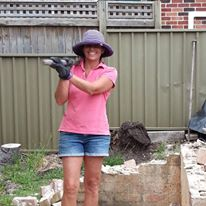 One of my Ancestors was part of a team building a church in Rose Bay, Sydney. I often wonder what is was it like in those days. Sadly he fell to his death while building a stone wall in 1898.

My least favourite part of the job is heights, I am petrified of heights. Which is debilitating when you are a carpenter. 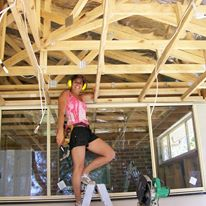 Where Do You See Yourself In 5 Years?

In the future I hope be a Building Designer / Interior Architect, Estimator and want to do Pre-purchase building inspections or all of the above! The construction industry has many pathways…

I would like to get off the tools full-time and continue carpentry part-time. As a carpenter you never stop learning, there are challenges around every corner. You need to be resourceful and think outside the square.

I also would like to keep doing picture hanging.

I love being a carpenter but even though I am cautious with safety (PPE) I think getting away from the dust will be a good idea in the near future. 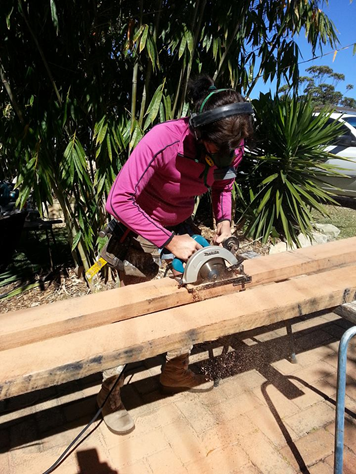 What Changes Do You Believe Are Needed In The Construction Industry?

I feel there could be some changes in the construction industry. OH&S policies are over the top, there are too many rules and restrictions.

Hiring special equipment and the time it takes to do a job now is getting too costly for clients.

I would like it to be easier for sole traders to obtain their builders licence in NSW, at the moment it is impossible.

There is about to be a shortage of builders and authorities will have to change that.

There should be a crack down in home renovator work…

What Number One Lesson Would You Share With Women Thinking Of A Career In Construction?

Start in the industry for the right reasons. Some women are out there just for the status.

Even though OH&S policies are over the top, PPE (personal protective equipment) is not. Look after your health. Keep fit, strong and when the going gets tough, ‘Suck it up Princess!’ 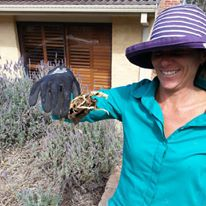 Thanks so much for sharing your story J.  I love your ambition, strength and tenacity to persue your dreams.

Are you a lady tradie or know someone who is?  I’d love to hear your story.