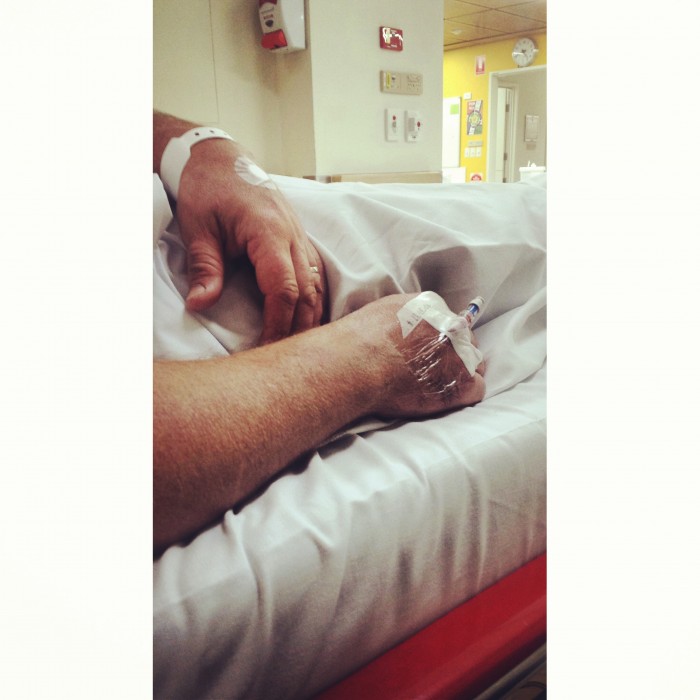 Early Saturday morning Adam got out of bed for a drink. This is nothing unusual, he gets up most nights. His neck was a little sore, so he gave it a stretch, next thing he remembers is me trying to rouse him on the floor. Fortunately I heard him fall and then the groan as he hit the floor, a sickly sound. It took me a little while to rouse him, he was conscious but dazed. Once able, we rolled him onto his back, this is when I noticed an egg on his head. When I say egg, I literally mean an egg size bump on the outside of his head. There was a small scratch on the egg, and that was all. Adam was too dizzy to stand, instead together we crawled to the lounge, where he spent the next hour relaxing with an ice pack. Eventually he was well enough to stand, and we went back to bed. We were both so shocked, we couldn’t sleep though, and the day quickly rolled around.

With rest, he felt better, only had a small headache, and we went about our day. He appeared dazed all day, a little out of it. By following morning the swelling on his egg, had gone down and the corner of his eye had started to darken. The afternoon saw his eyelid bruised and by Monday morning he had a total black eye, he looked a bit like a panda. Still very dazed, and getting muddled in conversation, we took him to a GP, who said he was fine. Though a little surprised by the lack of testing, we accepted the diagnosis, and got on with our day.

Tuesday was no better, in fact he spent most of the day ‘working’ from bed, still very muddled and getting lost in conversation, he was very slow. My concern was only increasing, so the decision was made to get a second opinion. Thank goodness we did. Our appointment was at 12pm Wednesday and within 2 minutes we were on our way to the Princess Alexandra hospital in Brisbane, where we were rushed through emergency to a bed for some testing.

First of all, a CT scan to rule out a base of skull fracture, then a scan of his face to rule out facial fractures, both of these came back with positive news, no fractures. However during their testing, it was discovered some of Adams neurological tests were abnormal. His pupils were unequal, and his testing on one side is not quite right. I had to leave him at the hospital, where the Doctors are now performing an MRI, another CT with dye that will flush through his arteries into his brain to check there is no blockage, and various other tests.

It’s such a shock and a timely reminder, that while we adore our house, and love our work, NOTHING is more important than our health, without this, there is no house to adore, or business to love. Though not all reports about our health system in the media are favourable, I have nothing by wonderful positive things to say. The nurses have mostly been fantastic, the Doctors attentive and very thorough, and the hospital itself, very comfortable. Adam had so many tests done yesterday, all so quickly and without hassle, all in the one place, from the comfort of a bed. We are truly blessed to have such a health system, that this is available to us. Whilst very worried, and unable to sleep, I do feel such a calm and a comfort knowing he is in the best place, in the best hands. I am anxiously waiting for the morning to come, I can wake the children, prepare them for their days and get to my husbands side to see what today will bring.