If you follow along on Instagram or Facebook, you will have seen this last week, that Adam was injured at work. A small injury, that at the time seemed rather insignificant. Who would have thought, that a splinter could be the cause of surgery and nearly a week off work?

Last Wednesday, while moving timber from the ground floor of a job up to the next floor, Adam felt a splinter go into his thumb. Annoyed at the time, he continued to work, feeling as though he just couldn’t spare the time to do anything about it. He sent me a text just before leaving the site, “I have the mother of all splinters! Prepare for removal!” I rallied the troops and prepared the dining table as a site for excavation. This scene is not unfamiliar to our family, splinter removal is a regular occurrence at the dining table.

I set up the variety of tweezers, pointed, flat and angled, a splinter picker, saline, and a dressing. Half an hour later, the splinter remains firmly wedged in Adams thumb joint, though bits of his skin and tissue were missing. An appointment was made at the local private hospital to see a doctor to have it removed.

The doctor was great, he gave two local anesthetic injections, removed what he could see, a 10mm x 2mm piece of timber, gave Adam antibiotics, a tetanus injection and a referral for scans and xrays in the morning. The morning came, and the timing of the scans, gave the first day off work, unfortunately the scan confirmed that there was still two pieces of timber in place, now we had to trip back to the local GP. The GP, gave two more local shots before attempting to remove the pieces of timber remaining, with no success. A phone call was made to the rooms of a hand specialist and an appointment made for Friday morning, day two off.

Friday came and an early morning trip to the Wesley to see the specialist resulted in surgery being booked for Monday which was to be day 3 off from work. It was thought that the deepest piece was actually quite small and would be easy to remove. On Monday we arrived at the Wesley for Adams 8am admission, he was taken away 30 minutes later, as his surgery was scheduled for 9am. 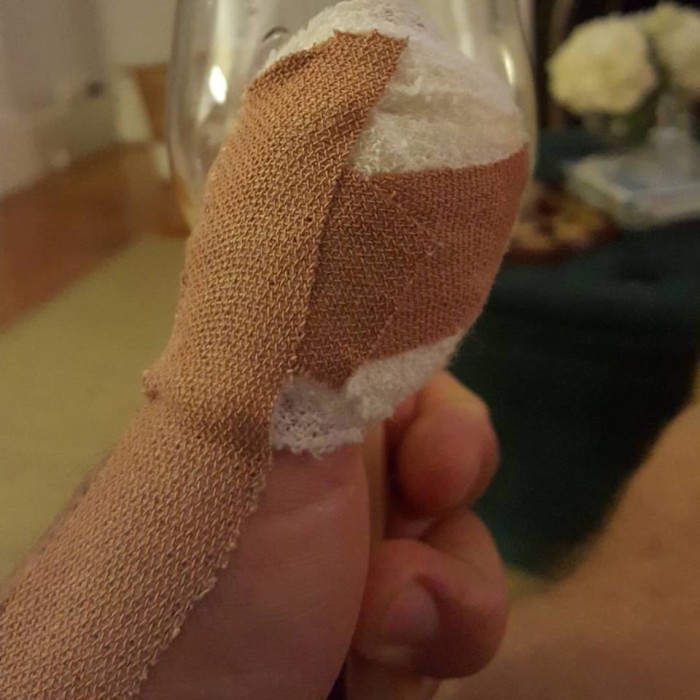 Self medicating with a glass of wine 🙂

I waited for 3 of the longest hours I can remember, before finally receiving a call to say he was well and in recovery. I could go and sit with him until he was ready to go home. Those were some very sweet words indeed. When I arrived in his room, Adam was proudly showing me his splinter that the surgeon had kindly kept for us. It was a another large piece, a further 8mm long!

He is recovering well, with little or no pain. Back home, we are still shocked that a splinter of all things has seen the need for surgery and with today included a total of  4 days off work. It just goes to show, that there is potential for anything to go wrong and even the seemingly small things, can cause great inconvenience.

Have you ever had a small thing cause a large disruption? Splinters a problem in your home?